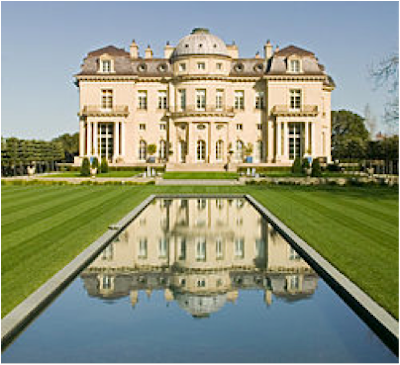 Several years ago a young contractor by the name of James Dawes, who specialized in salvaging materials from properties that were being demolished, contacted me because he had just salvaged a large quantity of Purple Vermont Slate from the historic Carolands Chateau in Hillsborough, California.
At the time, I was designing a new house in Los Altos where we had been planning on using a slate roof. The owner was interested and he purchased all the beautiful slate with a 90-year patina that a new slate roof could never match. In addition to the roof, two large vertical fireplaces were clad in the slate. Its storied history became the feature material of the house.
Over the years I’ve sought to introduce reclaimed materials wherever I could.  I recently finished a house where we renovated a historic water tower and used it as a staircase to link the four levels of the house together.  The entire interior of the water tower was clad in reclaimed redwood.  The graining was better than any new material I could purchase and, when re-milled, its color is stunning.
Another addition to a historic mid-century modern house in Los Altos Hills, California was clad in reclaimed teak. We had to epoxy-fill some areas, since reclaimed material sometimes needs careful selection in the field and may have some signs of it’s former use. But in the end the wood is the feature of the addition, both inside and out.  Again, the color and quality of the material would be hard to match with new material and using it saves it from simply ending up in a landfill somewhere.
Today I’m still working with James on a little studio for a long time client and we’ve managed to clad the entire structure inside and out with reclaimed materials.  All the cabinetry was salvaged material we simply re-purposed.  This wonderful material begins another life under the redwood trees.  It isn’t quite finished yet but it will be a unique little jewel box when it’s complete.